Time, methinks, for an extract from a Hamster-Sapiens book. If I had my way, I would have chosen to display the wonders that are The Psychic Historian; but that could possibly demean other fine works of hamster fiction, such as this one… 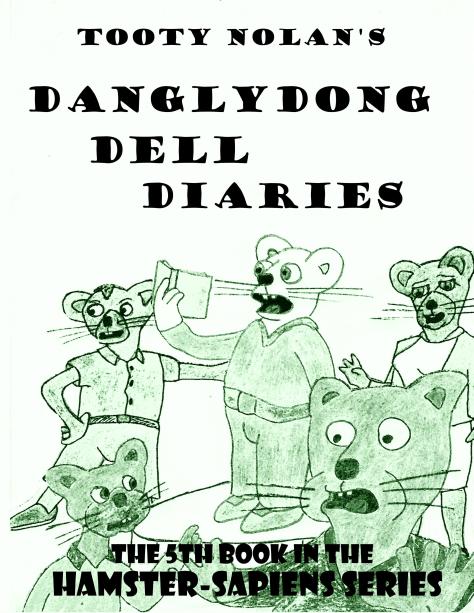 So, purely at the whim of randomness – or randominity, as I prefer to call it – appease your literary gut with this extract…

A waiter arrived moments later to inquire after Stubby’s requirements. Stubby recognised him as the former assassin – Malingerer Stench – and duly ordered a raspberry soufflé, which he was certain would anger the gerbil by reminding him of how he came to be living in Prannick, and in such a frightfully lowly social position too.

Felicity’s inquiring tilt of the head persuaded Stubby to explain that Malingerer Stench had once held the position of chief be-header in Sandy Desert Land, but had been lured to Prannick by the love of a travelling raspberry sales-girl, who subsequently left him, which forced the former death-merchant into a new vocation – that being bar-staff. Stubby hoped that by ordering a raspberry soufflé he was insulting the gerbil twice: Most obviously by the raspberry connection, but also by requesting a dessert – the spelling of which is almost exactly the same as desert.

“Oh, Primrose – you can be so cruel.” Felicity gently scolded the false harvest mouse.

“Stubby, please.” Stubby scolded in return. “You should only call me Primrose when my breasts make their presence felt. At all other times I should be referred to as Stubby.”

“Felt?” Brenda yelped and stood upright at the same moment, “You’s aint suggestin’ that my girl’s gotta squeeze your tits, is ya? Joan was thinkin’ you might be one of them lesbians: Girls don’t go squeezin’ tits ya know: That’s boy’s jobs.”

Brenda suddenly became aware that the bar had fallen silent and that everyone was looking at her. She gave a sickly smile, and then added, by way of explanation, “I’s from outta town. We talks a real whole load’a shit where I come from. You’s best be ignorin’ me. Now drink ya fluffin’ beer, ya nosey bastards.”

“Oh dear, Stubby,” Darkwood spoke above the startled exclamations of offended patrons, “I do believe that our proposed discussion of things most important will have to be put off for another time and another location.”

Indeed this was the case, and in three seconds flat the landlord had the six of them thrown out on their furry arses.

“An inauspicious beginning to our renewed endeavour together I fear.” Quentin opined whilst very obviously blaming Stubby entirely for their altered situation with looks that closely resembled daggers.

“You didn’t help either, mum – you big dopey twat!” Felicity sought to spread the blame.

“Never mind, never mind.” Stubby said in hushed tones as he quickly dusted everyone down. Then in a conspiratorial whisper he added, “I rather hoped that would happen actually. It was entirely deliberate, you know. I just wanted to make sure that none of you were being followed.”

Felicity responded with a whisper of her own. “Why would anyone be following us? Who knows that we’re here at all?”

“You’d be surprised.” Stubby replied, and then eased them all in the direction of a travelling fair as it clanked and clattered its way through the main street.

“I say, we’re all likely to be deafened by this frightful racket.” Darkwood complained as they walked beside an iron-wheeled wagon that was being drawn by a team of argumentative stag beetles.

“We may be deafened.” Stubby shouted above the din, “but so are those with inquiring ears.”

“Do you really think that we were being followed?” Felicity had to screech like a tortured lathe to make herself heard.

“The two miserable-looking curs in the corner by the window were giving you rapt attention.” Stubby bellowed like a loony, “And there was another standing beside the condom vendor’s sack taking notes.”

Darkwood was amazed. “But who might they be? Why would they expect us to be here? Might they be some kind of wizards? Oh my heart’s all of a flutter at the thought.”

“I don’t know.” Stubby roared, but already his voice was weakening, “Perhaps if you tell me all about your problem, and why you sent for me, then perhaps I can hazard a guess.”

So for the next five minutes they all took turns to shout informatively at Stubby as they strolled alongside the clanking wheels of the travelling fairground wagon – painfully apprising him of the situation.

When eventually the tale was told, Stubby guided them into a deserted laundry, where he was able to verbalise his opinion without the aid of a megaphone, and out of sight, just in case someone who might be following them could read lips.

“I’ve no doubt at all that Lucas Cleats fully intends to slay the inhabitants of the abbey. I don’t doubt his motivation or conviction either. What I do doubt is his free will. I remember Lucas when he was a cub. I watched him grow up. I think he has a great deal of latent psychic talent. The Lucas Cleats that I knew wanted to free Prannick of its pious overseers more than anything: But he would never stoop to murder.”

“You’s meaning some guy’s got control over this Cleats’ guy’s brain and stuff?” Brenda exclaimed in a brief moment of mental clarity.

“And you believe that we are also pawns in some Machiavellian plot?” Quentin added.

Stubby was doubly impressed with Quentin Blackheart: Firstly for being able to say ‘Machiavellian’: Secondly for using a word that was utterly meaningless in both Hamster-Britain and Prannick.

“Indeed.” He replied, deciding that he would delay an investigation into the unexpected phenomenon until the current crisis was dealt with. “There are greater plans afoot than the mere extermination of a few monks. And it’s our task to identify and thwart it.”

“The best way that we can thwart such an affront to decency is by saving the monks.” Felicity snarled at some imagined monster.

So Stubby repeated his “Indeed”, and then led the way back into the street.

Wasn’t that lovely? You can buy the e-book (very cheaply) by visiting the Tooty’s E-Books Available to Buy Here page. It is a veritable Aladdin’s cave of literary fabulousness.